Electrical Machines are designed to generate torque on a rotor shaft, thanks to magnetic forces created by magnetic fields. ​

To explain the impact of magnetic field orientation, a straight coil of wire fed by a DC current can be used to generate a nearly uniform magnetic field similar to a bar magnet, as visualized in the picture below.

When feeding the same coil by a sinusoidal current source (AC),  the magnetic field produced will be oriented in function of the current sign. 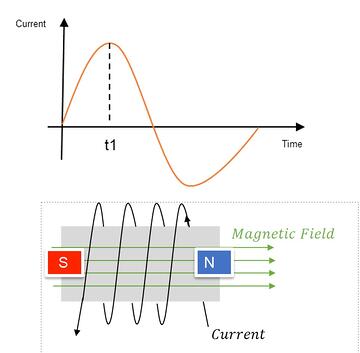 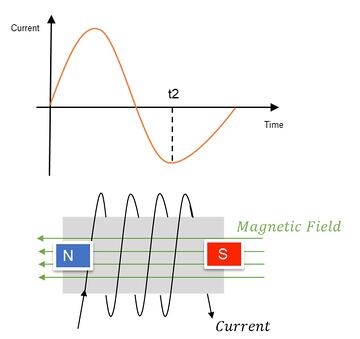 In permanent magnet (PM) motors (radial and axial), the set of AC windings generate a series of north and south magnetic poles along the air-gap of the machine.​

The interaction between these poles and the permanent magnetic poles on the rotor surface, is responsible for the torque production. ​

Based on the flux direction in the air gap, electrical machines are designated as either a radial- or an axial flux machine. 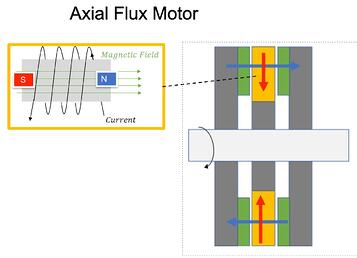 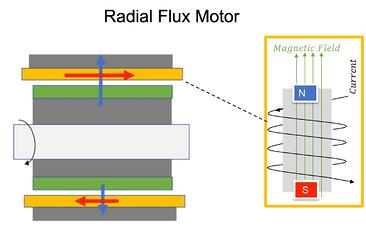 A yokeless axial flux machine allows the use of a double rotor. Since the PM machine output torque is proportional to the effective air-gap area for a constant electrical and magnetic loading, the AFPM (axial flux permanent magnet) machine with double air-gap (rotor) achieves a higher torque-to-weight ratio. This is further leveraged by “lever” effect; For axial flux machines, the magnets are located further away from the central axis. This results in a larger lever on the central axis, and as such produces more torque.

Magnax Closed a 16 Million Euro Series A Funding Round

IEEE Spectrum: This Inside-Out Motor for EVs Is Power Dense and (Finally) Practical

Traxial was featured in a free editorial in IEEE Spectrum, the no.1 technology engineering and…