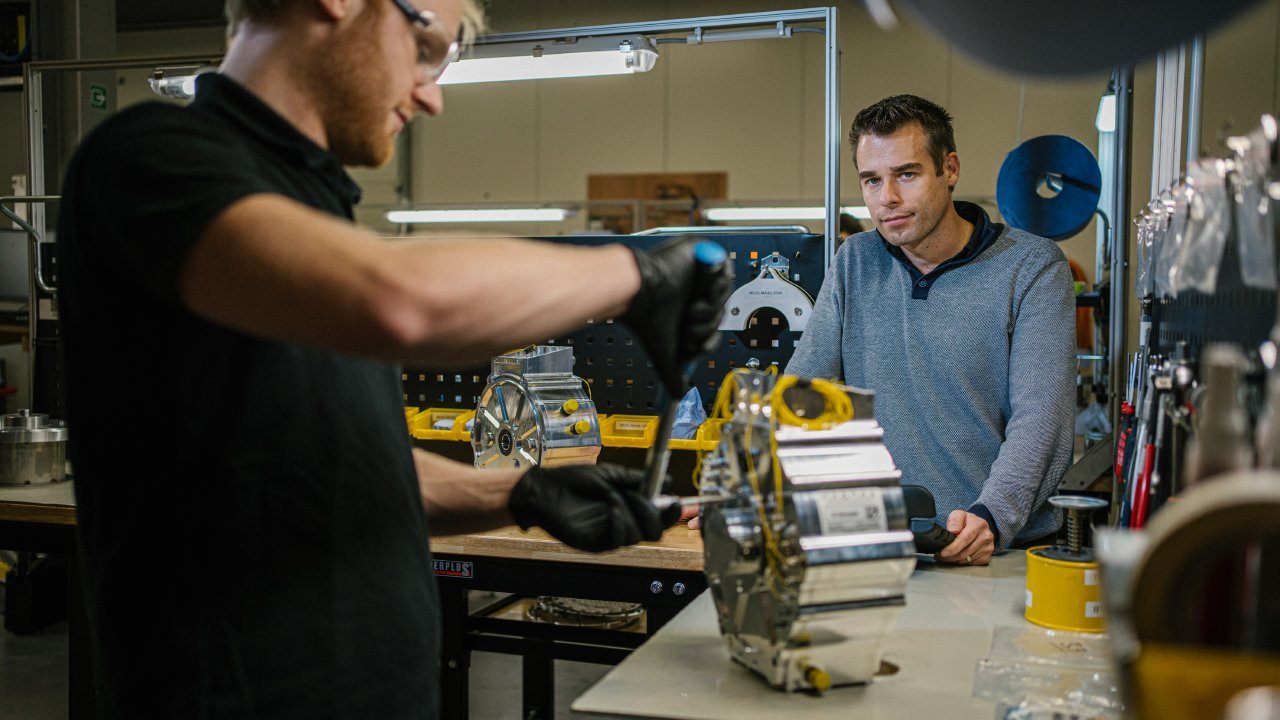 “We have already produced tens of prototypes which are being used for tests,” says Daan Moreels of Traxial. “From our test bench tests in June, it appeared that we could deliver 2.5 times more power than a Tesla motor of the same weight. For production versions, this will easily be three times higher. Because of its high efficiency, our motor is also capable of increasing the driving range of a car up to 20 percent. For a BMW i3 our calculations even yielded an increase of a quarter. That exceeded our expectations.”

Traxial will now refine those prototypes. The target is to produce in 2022. Moreels: “Our technology is mature enough to be implemented in vehicles that will be released to the market in a few years from now. In the first phase, we aim for manufacturers of sports cars, off-highway vehicles, light commercial vehicles, and trucks, tracked vehicles, and drones – customers that require compact, light motors with high power output. The electric passenger vehicle comes next. It’s our ambition to conquer a large part of the market of electric motors, a billion-dollar market in full growth.”

Traxial was founded in 2015 by Peter Leijnen, who assembled a light generator for a foldable wind turbine in his garage in Deinze for a customer. Because this generator had to be light and compact, but at the same time had to deliver a lot of torque, Leijnen opted for an axial machine instead of the classical and easier to manufacture radial machine, of which millions are made each day. Leijnen built upon the expertise of Ghent University, which has been researching so-called axial flux machines since 2008. According to experts, they are the electric motors of the next generation, because they are more efficient in terms of electromagnetics.

“ I’m expecting tens of innovative companies to catch up with Tesla in the next years. “
– Daan Moreels, Co-founder Traxial

In 2016, Leijnen got to know aerospace engineer Daan Moreels at the school gate. He brought in a third co-founder, Kester Goh, an expert in venture capital and IT start-ups. At the end of 2017, the three decided to shift the product and market development from wind energy to electric vehicles.

It turned out to be a justified switch. “The past year, we were contacted by over 4000 companies who were interested in the high power density and compactness of our prototypes.”, says Moreels, who already started years ago with the marketing of the new technology. “All of these companies are in some way or another active in e-mobility and the development of electric vehicles, boats, or airplanes. Everyone is working on electrification. Because of the large interest, we could choose with which parties we work together.”

The axial motor – in which the magnetic flux is oriented in the same direction as the axis of the motor and not perpendicular to it – was invented in the 19th century by the British physicist Michael Faraday, but only reappeared some ten years ago. The past 100 years, motor manufacturers chose the radial motor, because it is easy to produce. But thanks to modern production techniques, it has also become possible to produce axial motors on a large scale.

An axial motor looks very differently. It is very thin and has more torque and power for the same volume. An additional advantage is that it requires a lot less iron, 20 percent less magnet material and three times less copper. Therefore, it weighs three to four times less than a traditional radial motor. This, at the same time, means less CO₂ emissions.

Moreels: “Once you know that the magnet material and copper make up at least 40 percent of the production costs of an e-motor, it immediately becomes clear that this motor concept allows you to go into mass production cheaper and more cost efficient .”

For the production, Traxial – which stands for magnetic axial – teams up with a manufacturing subcontractor. Moreels: “We cooperate closely with this subcontractor but we stay in charge of the commercial matters. We do not exclude that for the production of motors for passenger drones – a niche market – we will call upon a different manufacturer.”

A few recent investors and business angels injected 16 million euros in Traxial. Moreels: “With this money, we will start up new developments, hire engineers and explore new markets.

“ We currently mostly collaborate with parties who want to build a couple of thousand vehicles. The common EV is the last step. “
– Daan Moreels, Co-founder Traxial

Traxial focuses on the production of motors with a diameter of 250 mm, a length of 120 mm, and a power of 150 – 500 bhp. Moreels is not afraid of being copied. “We have a strong patent portfolio. This way, large car manufacturers can also take a license for in-house production.”

Is there a chance that we will find the new Traxial motor in the EVs of a large European manufacturer in a couple of years? Moreels: “I hope even sooner. With some car manufacturers, we are already engaged in knowledge exchange on a research-level. I cannot give any names, but I expect tens of innovative companies to catch up with Tesla in the coming years, particularly in driving range, and that next to the traditional car manufacturers, we will see 50 to 100 developers and manufacturers of EVs emerge.

Moreels says Traxial is being contacted by interested parties every day. “This ranges from traditional car manufacturers over suppliers to small niche players.” Traxial has two competitors in the European market. The British YASA – that already sold a few thousand axial motors to among others Ferrari (SF90 Stradale) – and the Slovenian Emrax. Moreels: “The latter is not capable of going into mass production. Our advantage to Yasa is that we can scale up quickly because we work with production partners. In China, there is a company that uses an older type of motor with a way lower power density.”

Traxial hopes to let 25,000 motors roll off the assembly line yearly from 2023 onwards. Moreels: “That is equally the target of our German partner. Next, we can scale up to, say, 1 million. Production-wise, there is no single issue.

Traxial managed revenue of just over 1 million euros this year. Among others by selling special designs and prototypes to automotive component suppliers who execute tests for car manufacturers. The prototypes are being built in a workshop in Kortrijk.

Moreels: “We are currently building an axial flux motor for a drivetrain supplier who would like to use it for passenger vehicles from 2025 onwards. We also supplied prototypes for an American company that builds passenger drones and is going to test these next year, albeit without passengers. We currently mostly collaborate with parties who want to build a couple of thousand vehicles. The common EV is the last step.”

Traxial also recently started the development of entire powertrains – the collective term for all components making the wheels spin – that maximally exploit the advantages of the axial technology. “Our technology is revolutionary”, says Moreels. “It is a lot more power-dense, a lot more efficient, uses a lot less material, and is being developed all the way up to mass series production. We are right on time for the next generation EVs. Traxial employs around 30 people.