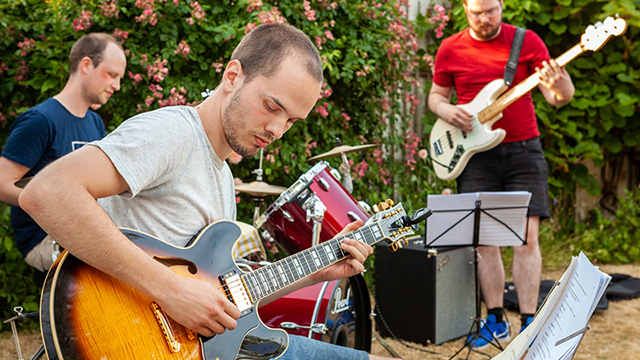 Even though Mathieu has a coordinator role, he still spends quite a bit of time with his sleeves rolled up. A clear advantage, as there’s no better way to sense how to plan and divide the workload. In his spare time, his coordination skills – hand coordination in this case – come in handy too. You’ll find him playing Django Reinhardt songs on one of his guitars.

How did you end up at Traxial?

I used to work at a technology start-up in the UK, but I wanted to return to Belgium. The environment of a technology start-up has always appealed to me for several reasons. The main thing is that I get a lot of satisfaction from researching technology and also putting it into practice at the same time. You can see the impact of your research as the product grows. And in our case, it even has an ecological impact.

What does your role entail?

The biggest chunk of my daily job, around 60%, is spent on my team-leading activities. The remaining time goes to pure engineering activities, such as preparing technical drawings to share with our suppliers so they can manufacture the components we need.

As a team leader, I manage three sub-teams: the test, simulation, and mechanical engineering teams. For each of them, I draft the weekly planning.

I have only been doing this role a couple of months. The main thing I’ve learned is how indispensable a continuous flow of information is. It’s one of the reasons I barely work remotely, even though management gives us the freedom to do so.

Most recently, I was also involved in the redevelopment activities of our workshop. We’ve been working hard on getting our brand-new pilot line ready and at the same time upgrading our workshop.

Its open communication for sure. I’ll give you an example. I’ve made suggestions to improve certain processes and I’ve learned that there’s always room for discussion. Answers such as “but we’ve always been doing it this way” are out of the question. And the communication is two way. I’m sure management wouldn’t appreciate us saying something like this either. We’re an R&D company, so it would be unnatural if we weren’t always curious.

The best part of your job?

When we put a new motor prototype on the testbench after months of development and the test results finally come in! From R&D to operations and supply chain, the entire Traxial team puts so much effort into the design and production of these motors. Seeing the vision become reality is what gives me the most job satisfaction.

What productivity tip do you swear by?

Excellent time management is a priority for everyone but even more so in coordinating roles, I believe. One trick I swear by is collecting my to-do’s and notes in one central spot. I’ve learned that different scraps of paper make it impossible to keep an overview. If everything is centralized, you can frequently go over it and follow up on everything.

Who do you look up to?

The team of engineers behind the Apollo program who facilitated the moon landing of Neil Armstrong and Buzz Aldrin in 1969. John F. Kennedy had only announced his ambitious goal eight years earlier: sending an American safely to the moon before the end of the decade, and they managed to realize this within the given timeframe.

Louis is passionate about anything on wheels. He loves to work on cars and motors,…

As a kid, Jasper always wanted to be an inventor. He grew up experimenting by…