The first automobiles were introduced more than a century ago. Over the years, and like any other business, car manufacturers have had to adapt to market changes to retain their competitive edge.

One of these challenging market changes was the oil crisis of the late 1970s, which brought with it a fourfold increase in oil prices. These sky-high oil prices cooled down once the embargo was over but five years later oil production again declined following a revolution in Iran. Consumers no longer wanted cars that guzzled gasoline. 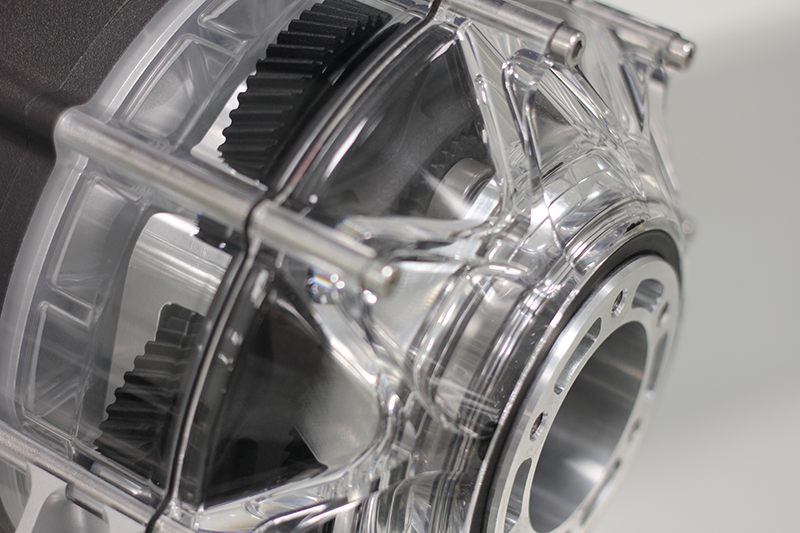 This incentivized car manufacturers to look for ways to increase the mileage of their models by reducing their weight and improving their efficiency. One of the options for increased efficiency was to add more gears to the widespread 4-speed gearboxes.

ICE cars require a gearbox with various gear ratios to effectively transfer the power to the wheels. The internal combustion engine only develops torque in a limited speed range. By adding more gear ratios between engine and wheel, it’s easier to keep the engine speed at the most efficient point possible, whatever speed you’re driving at. Still today, 9- to even 11-speed automatic gearboxes are used in passenger cars.

If you look at the EV market, most electric vehicles use a single-speed transmission. They technically don’t need a multi-speed gearbox because an electric motor delivers its maximum torque at zero RPM. You might come across a multi-speed gearbox in the context of Formula E and Extreme E for performance reasons as the acceleration of an electric motor does fade at the top end. But what about the efficiency of an e-motor?

If you’ve ever driven an EV, you’ll know how easy it is to get hooked after just one drive. The responsive electric powertrain makes driving it a real pleasure. Performance levels of electric cars are often some of the first numbers discussed at any EV launch. The targets are ever-increasing without a clear use of insight. Will this remain the main focus?

The situation in Ukraine and COVID-19 are having a severe impact on energy prices:

This translates into a changing total cost of ownership (TCO) of both electric vehicles and internal combustion engines. The TCO—calculated in detail by fleet managers—is an important argument for making the shift toward electric vehicles. So far, charging infrastructure providers haven’t increased their prices at the same speed (yet). We dug into our invoices and found a charging tariff of €0.35/kWh in March 2020 versus €0.50/kWh in March 2022. However, a quick Google search tells us many providers are working on an increase. Later in this article, we take into account a potential charging tariff of €0.65/kWh.

We might wonder whether the current economic environment could impact the priorities of EV drivers. Could history be repeating itself? If so, what technological solutions could automotive manufacturers come up with this time to increase the EV range and efficiency, similar to their fuel economy actions and innovations back in the 1970s?

While the single-speed transmission of an EV will regulate the motor and deliver the best balance between acceleration and top speed, a dual-speed transmission might improve the drivetrain efficiency. Both independent researchers and transmission developers mention driving range increases between 5% and 15%.

Sure, there’s a price premium involved in using a dual-speed transmission. Let’s do a quick calculation based on a vehicle amortization of 10 years to investigate the potential gains. For the sake of convenience, we’ll assume this premium is €200 (so a cost of €20/year) and that 10% extra range is gained when using a dual-speed transmission. Our electric vehicle has an average consumption of 0.18 kWh/km.

The potential savings vary based on the charging tariff: 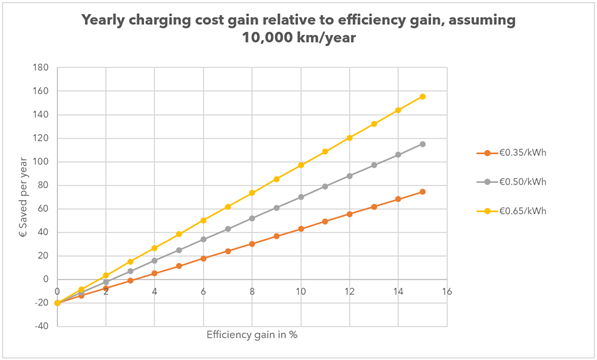 For an end consumer, this would be the final cost per km: 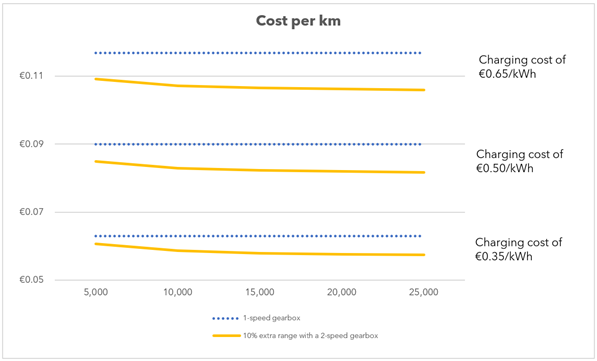 This efficiency gain doesn’t take into account any possible wins when it comes to the dimensions of several components. For example, a 2-speed transmission could also allow for the battery or the motor to be smaller. With batteries getting more expensive, that might not be a bad idea.

As a conclusion… The price of vehicle components always needs to be kept in perspective of the total vehicle price tag or the total cost of ownership of the vehicle. Depending on the energy cost evolution, the priorities of an electric drive system could change…